You are here: Home / Blog / A guest blog – Treshnish treasures

Thank you so much to Nancy and Folkert for sharing their “Treshnish treasures” with us.  They stayed in Duill Cottage.   Nancy and Folkert live on an island in the Netherlands and always travel to Mull from there by public transport.   The Ulva Ferry Community bus has made the last leg of their journey so easy!

“It has been the 4th time for us to spent our holiday at Treshnish and Haunn cottages at the beautiful isle of Mull.  We have also visited other locations at this island but we keep coming back to the wonders of the wildlife and the amazing scenery of the northwest.

Our adventure started right away on our first daytrip.  We went down to the gully south of the main house and right north of Treshnish point. Spotting a sleeping seal in the cold atlantic water we were surprised by a family of otters crawling up and down the rocky shore and passing us within 25 metres. 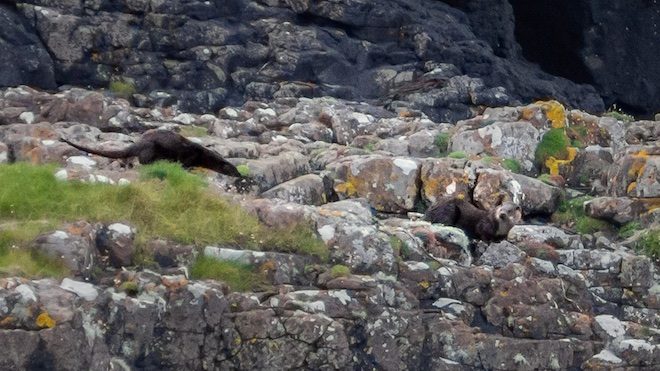 Later that same day it became a real close encounter when I was walking down the entrance road.  An otter was peeking through the undergrowth and looked me right into my eyes for about 2 seconds in a distance of less than 2 metres. I only went out for spotting the deer that was reported at the entrance of the Treshnish premisses when this present came on my path. The trees were filled with finches and tits, well hidden by the autumn-colloured leaves of the various trees alongside the road.

The second day we went out for the trail to Port Haunn. Sea eagles flew above our heads and lots of buzzards were active in the area. In one of the gullies we spotted a grey seal with a stillborn pup. It was heartbraking to watch her attempts to bring life back in to the pup but she didn’t succeed. After a struggle for half an hour she gave up on it and went into the water.   500 yards further ahead, near the whisky-cave we discovered a dead dolphin. In the evening we tried to spot otters again, without succes by the way but the deercalve we did see.

Day three we spent hiking to Calgary bay, just down entrance-road to Treshnish we caught the Henharrier on camera, hunting down the grassy slopes near the river. Several shags were seen along the coastline and Raven were communicating with each other. At Calgary bay we spotted hundreds of geese and we found the remains of a whale, local experts (Stephen and Linda) informed us that is was a Cuviers Whale. 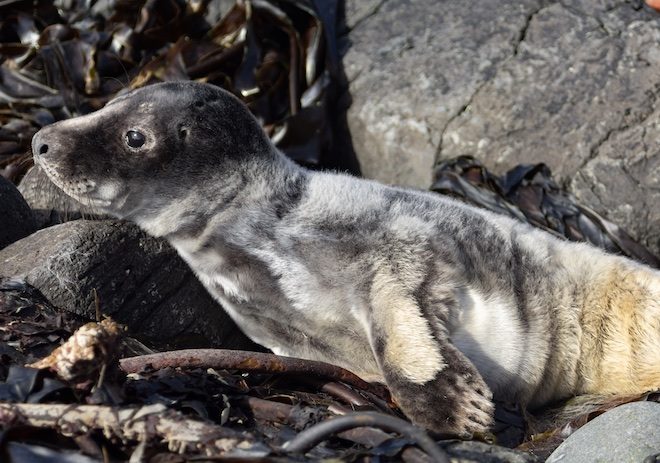 A day out with Ewan Miles from Nature Scotland, he took us to the surroundings of Dervaig.  We observed the tracks of otters, pinemarten, voles and deer. Dozens of seals and an otter were waiting for us near Croig and Ewan showed us the Sea-eagle. The weather was not that good but Ewan told us a lot about the various habitats of the isle of Mull. It was a very educational trip and worth while.

The next day we went out again in an attempt to reach the abandoned village of Crackaig. Again eagles flew around us and we encountered a freshly born baby gray seal. Along the steep cliffs we went carefully scanning the see for otters and dolphins, observing beautifull mushrooms and lichen, collecting some seashells along the way and dreaming about a visit to the clearly visible Treshnish isles in the near future. A few remains of sheep were found and we took the eartags to hand over to the owners. Plenty of rabbits to be seen near the farm. 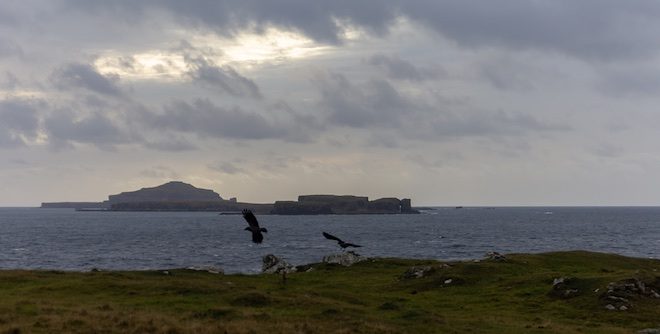 Another day with encounters with a deer. I was aware of a stag hiding in the shrubbery near the waterfall at the northern boundary of the Treshnish estate and wanted to photograph it. Sadly enough it spotted me first so i missed the opportunity for a picture. Also no otters today, maybe it was because of the weather, our lack of patience or just bad luck.  We did see another baby seal again.

We also did investigate the contents of the pellets of a Barn owl.  The landowner was just as curious as me so at least we found some remains of vole, some shrew and a mole. A beautiful feather of the Barn owl was also taken.

Day 7, even more deer, in the morning we spotted a group of hinds near the entrance road. The Hen harrier was hunting right in front of Toechtamhor. Later that day we would be witnessing the attack of a Sparrow hawk, 2.5 metres away from us and for the last time we went otter spotting. Without succes but what a beautiful sunset we got! The sky was filled with an array of colours you almost never see in our homecountry, the isle of Vlieland in the Netherlands.

Even after our 6th visit to the isle of Mull  we are convinced there is still more to discover, every year we find new things, we meet new people and Summerset shows us more hidden secrets at Treshnish. Future visitors we can recommend a tour with Ewan, it is a very educational way to discover more of Mull.  We want to express our gratitude to Caroline and Summerset for their relentless efforts to make our holiday a Mulliday. We really enjoyed our stay at Treshnish again and we will most certainly come back.” 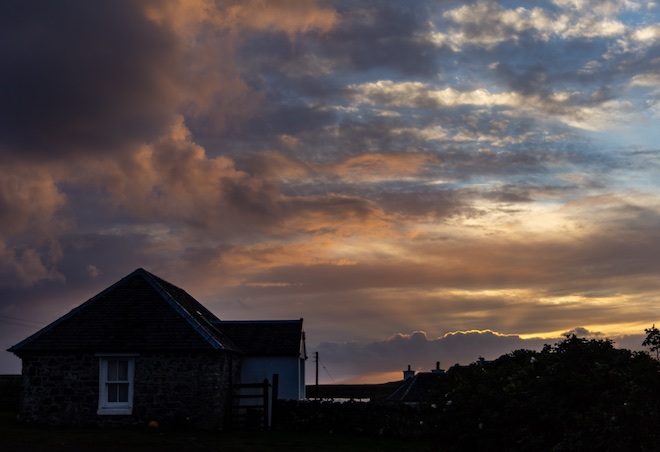 Thank you Nancy and Folkert, we really enjoy your visits and look forward to seeing you next time!  And thank you for sharing your beautiful photographs and interesting record of the wildlife you encountered while you were here.

Photographs by Nancy and Folkert Janssen.