You are here: Home / Blog / A remote beach clean on Mull

A remote beach clean on Mull

This is a story about a remote beach clean on Mull.  A story with a happy ending.  We all know waste plastic is a huge issue around the world. It is devastating to see what we, the human race, are doing to the planet, and sobering when we realise that nowhere is safe from this problem. Even here. 25 years ago when we moved here, we were still finding bits of wooden fishboxes washed up on the shore. Not so now. Nothing but plastic now.

We realise how small the planet is when we find lobster tags from Newfoundland, fishing buoys from Providence, Maine and a neighbour finds a boat washed up on the shores of Loch Tuath, having fallen off a container ship on its way from Denmark to Greenland. 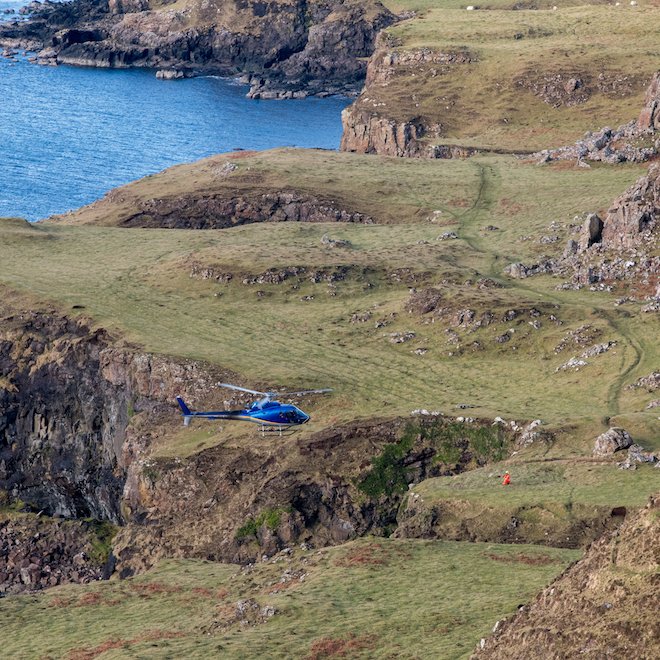 Treshnish has 4 miles of coastline and as much as we would like to, it is just not possible to keep every inch picked clean of the marine plastic and rubbish that washes in with the tides. But we do what we can and usually where there is access with a quad bike or a tractor. Guests often help by picking up beach plastic and leaving it where we can reach it with the quad bike. Mull Otter Group have organised beach cleans here in the past too. All this is a great help, and makes the never-ending task feel less onerous.

A large number of our hill sheep live along the coast between Haunn and Crackaig. This means that Somerset spends a big part of his days during lambing over there keeping an eye on his flock. Part of good shepherding is waiting and observing ewes in the process of having their lambs, in case they need a helping hand. In 2019 he decided to use his waiting time usefully by picking marine litter up from along the shore below Crackaig. By the end of lambing he had filled a tonne dumpy bag. The following lambing time, he picked a second bag between there and the Whisky Cave. This involved some back breaking climbs carrying hefty bits of plastic and rope up that steep gully by the Cave. 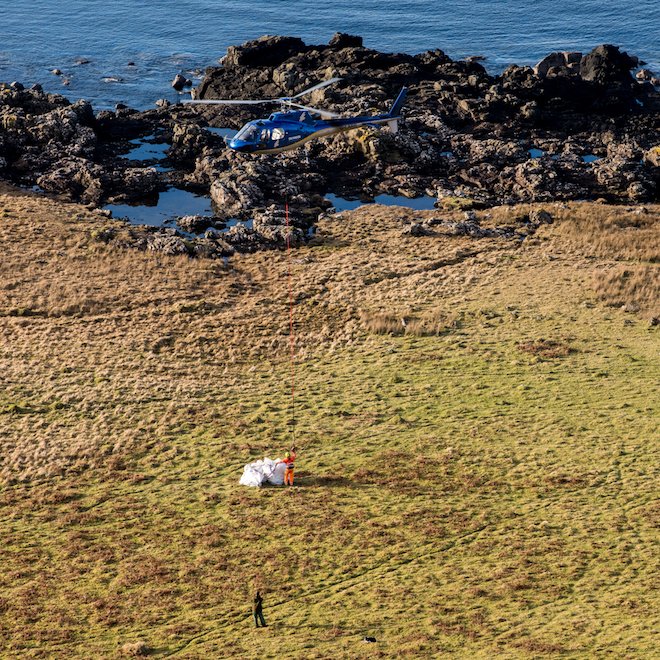 But the problem remained where it was. All be it in bags. On the shore miles from the nearest vehicular access. Our wildest dream was to get a helicopter in to lift it out to a place where we could reach it with a vehicle. But we baulked at the potential cost of this, and left things as they were. Hoping that something would come along…

Just before Christmas we heard on the grapevine that Skyhook, a subsidiary of island based construction company TSL Contractors, were going to be lifting packs of fencing materials out into position on the island of Ulva’s hillsides. We summed up courage to contact them and ask them the question.  Could they help?  We had a quick and very positive response – that they could and they would. 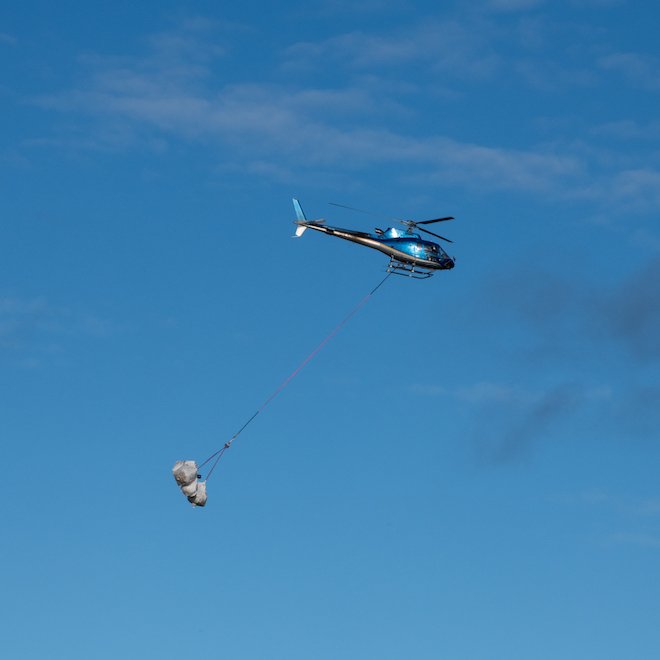 The helpful Skyhook pilot, Murray, contacted us yesterday to let us know they would do the uplift this morning.  So Somerset went down to the shore by the Whisky Cave in the afternoon to check the bags would be safe to lift.  As he was there, and it wasn’t raining, he spent the afternoon filling a third bag.

We just crossed the burn at Crackaig this morning when we heard the thud of the helicopter! They were earlier than we expected. It was all over in a flash really.  Hours of litter picking, 3 and a half dumpy bags of marine rubbish, and a helicopter – moved it all in one lift.

The helicopter pilot let the two ground crew down first, one beside the two bags near Crackaig and the other by the one at the Whisky Cave. Once the bags were attached, he flew them over the hill to the roadside beyond Larach Mhor. Then he returned for the two ground crew. And that was it! Off! It took all of 5 minutes! We both felt quite emotional, with tears in our eyes, at the sight of the bags disappearing over the hill.

Annoyingly my camera froze so I missed getting the shot of the bags dangling under the helicopter with the Treshnish Isles in the background.

We are so very grateful to Skyhook for doing this. A hugely generous gesture. Thank you. 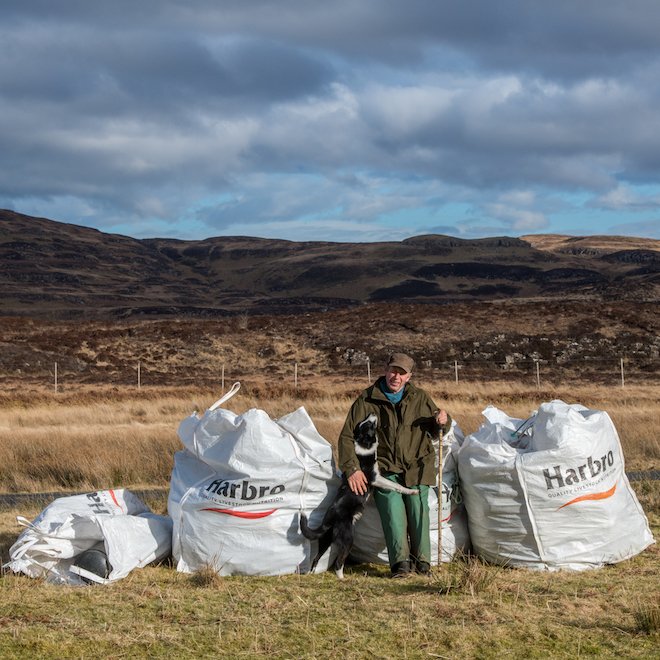