You are here: Home / Blog / Aerial views of Treshnish

The main plus for me of aerial bracken control is that it gives us a chance to get some aerial views of Treshnish! For 10 years we were organic here, which meant we could only control the bracken that we could reach by machine or cut by hand as chemical treatment was forbidden. Farmer was very effective in reducing the spread of bracken in the areas he could easily routinely mow, but so much of the hill and coastline is inexcessible by tractor or quad, so aerial control is the only way to curb its enthusiasm for marching across the hills – unless we could draft in an army of volunteers with scythes, three times a year..?? Towards the end of our 10 organic years, we could see that the biodiversity in certain areas was beginning to be dominated by encroaching bracken, and so a decision was made to stop being organic.

I came across these photographs today in amongst the thousands of un-catalogued images in my photograph library and thought I would blog them before I lost them again! When the pilot lands the helicopter it is a question of grabbing the nearest camera and rushing for the door. Farmer hadn’t used this camera before, so he can be excused for the occasional wobble or fuzzy shot, especially as he was having to guide the pilot to the areas of bracken we wanted to control, at height (he suffers from vertigo) and at speed. On the ground the cattle shed was full of sheep waiting to be shorn. A busy day in the summer of 2012, taken mid July. 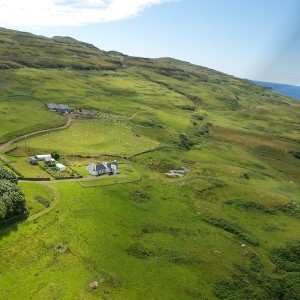 This photograph, at a jaunty angle, shows you the track between Treshnish and Haunn with the sea beyond. 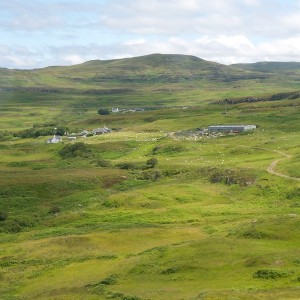 You can see the cattle shed hidden away from the traditional farm square with a tight concentration of sheep in the fields nearby. (It was shearing day). 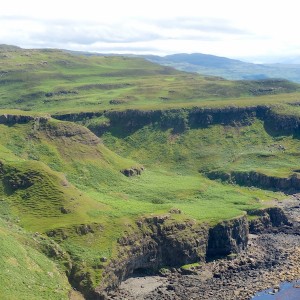 The Treshnish headland coastline, beyond Haunn, showing the raised beaches. 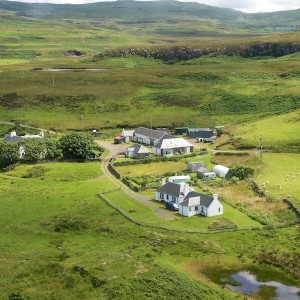 This is my favourite one as it shows the Treshnish Cottages. Shieling, with its white porch, sitting in its own garden by the farm yard gate. Our own house in the trees. The Studio a little further back with its sunroom. Duill overlooking the little lochan and Shian with its big windows looking straight out to sea. Obviously when the sun spaces for Shian and Duill are finished these photographs will be out of date, but the views will be the same!