You are here: Home / Blog / Airglow

Last night I caught a glimpse of an Airglow.  They are more rare than the Aurora Borealis!  An Airglow is ‘a faint emission of light from a planetary atmosphere’. It softly lights up the sky. I have only knowingly seen it a couple of times. Last night was apparently a very strong one, but unfortunately it was cloudy here when the airglow was at its peak. I discovered today that if I had looked in to the eastern and southern skies I could have seen it, but I only looked north.  As the cloud cleared, I was able to capture the Aurora on camera so I cannot complain! 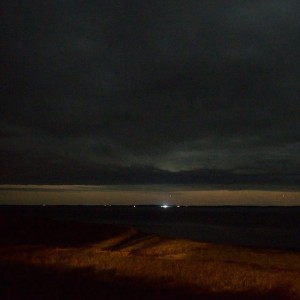 The first unusual sight I had was of the light underneath the thick cloud, showing that the sky behind was being lit up. The streak of green between Coll and the cloud was unusual too.  As I stood willing the clouds to clear, I listened to owls calling from the wood, and the waves on the shore. 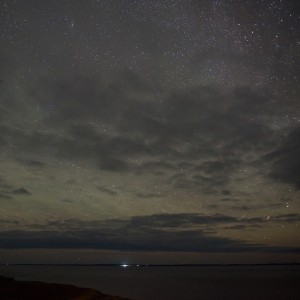 The cloud began to clear, and the drifts of Airglow were faintly visible. 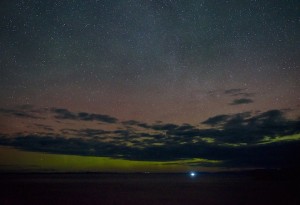 There was some colour briefly and then it faded. I left the time-lapse running overnight, and captured a bit of airglow between the dark night clouds. 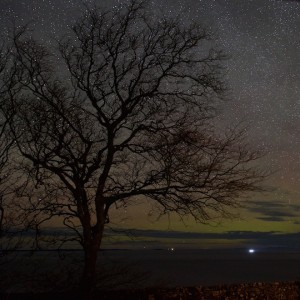 We were fully booked for New Year and all but one of our guests have gone, and I assume, like us, are back at work. We stole a few nights away after Hogmanay – one night with relatives in Galashiels and 2 nights with friends in Edinburgh. We rented an Airbnb listed flat in the New Town which was spacious and well located, within easy walking distance of a lovely ethical cafe called Urban Angel, sourcing local and fairtrade produce not to mention delicious smoothies and amazing coffees. We went to see a film (The Danish Girl). The screen was so much bigger than the Screen Machine, which is visiting Mull again next week.

We visited 2 galleries, one was the Fruitmarket – I particularly liked Robert Irwin’s Disc and a beautiful 16mm film by Tacit Dean, of sea and lighthouse. (I am not sure what it is called).  The second gallery we went to was the Scottish Portrait Gallery – to see the BP Portrait Award exhibition – which we all really enjoyed. A bonus was seeing the Document Scotland exhibition. A group of photographs documenting aspects of Scotland – I would have loved to have done one of their projects!

It is good to be home though..