You are here: Home / Blog / Calgary Art in Nature

Calgary Art in Nature is more than just a woodland walk, gallery or a tearoom. There are also artists studios there including the carving studio of the owner, Matthew Reade. This weekend he unveiled his largest piece of work so far. Fergal the basking shark. He had originally planned to hang it in the tearoom from the ceiling, but it was too big! So it sits in the courtyard, a giant fish out of water, and looks rather impressive.

Matthew’s studio overlooks the old mill pond. He shares the workspace with another artist/carver and a jeweller. Upstairs there is a gallery featuring the varied work of several local Mull based artists. It is well worth a visit as the exhibition changes as things are sold and gaps filled with new work. 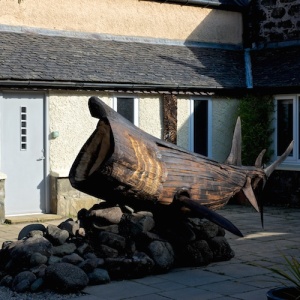 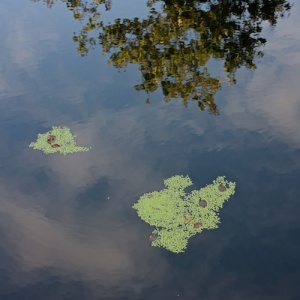 On the 19th and 20th September Calgary Art in Nature is hosting an event called Embrace which is being put on in conjunction with our local Art Centre An Tobar. I have just bought tickets as it looks really good! It is an environmental piece of work inspired by the Chipko movement in India.

We sat and enjoyed tea and cake in the sunshine. We would highly recommend the baking – particularly the orange and almond gluten free cake! Calgary Art in Nature is open 7 days a week from April until mid October. At the moment Matthew’s work is on display in the tea room. 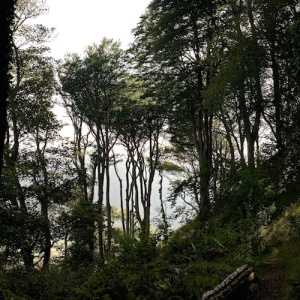 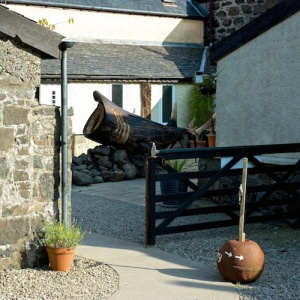 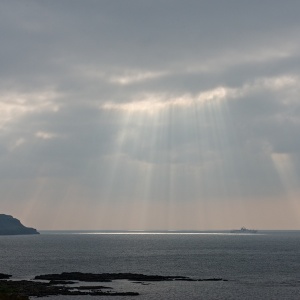 I took advantage of the weather and walked home. It takes about an hour. There was very little traffic! As I approached the turning to Treshnish a sea eagle flew over the fields below the road and landed just out of sight, it was being mobbed by two noisy ravens and a hooded crow. It took off again a few seconds later and flew into the Treshnish wood tree tops, followed by the ravens and just beyond it I could see a heron take flight. All quite exciting – but no long lens on the camera or binoculars!

Previous article Green Tourism
Next article Not a twite