You are here: Home / Blog / Corncrakes on Mull

You are more likely to hear Corncrakes (Crex crex) on Iona and on the Ross of Mull than up here in the north of the island, which is why we get so excited on the rare occasions we do hear them here at Treshnish!

This summer our nights have been quiet, although there has been a corncrake, nearby, calling from the fields between Calgary and Frachadil. There was a corncrake at Treshnish last summer, and a couple of summers before that we had a pair in residence at Haunn, within the cottage gardens which were regularly seen and a pair near Treshnish which were regularly heard – it was very exciting to think the Haunn pair might have been breeding as they seemed to go through the right sequence/timing of calling and not calling which indicated they could have been.

I was lucky enough to see the Haunn corncrake, though not quick enough to photograph it sadly – and Leena regularly saw it on Saturdays when she was working in the cottages!! They didn’t seem at all frightened by the human activity around the cottages, though we were concerned about dogs and the potential disaster if a dog were to chase (or worse) this rarest of birds.

I dont know what the exact number of corncrakes on Mull and Iona is, but in 2008 there were about 50 calling birds on Iona and around 10 on the ross of Mull. Modern farming and mechanisation had undoubtably taken their toll on the corncrake population but for the last 20 years we, like many other farmers and crofters on the islands, have been managing our grassland in special ways to help increase the population – cutting our silage or hay in ‘bird friendly’ patterns and cutting the fields later in August once the young have safely fledged. We also have areas set aside as early cover for corncrakes adjoining our pastures too.

The crek crek sound of the corncrake call is very distinctive, and gives little clue as to their exact whereabouts, sounding as it does as if the corncrake was ‘throwing’ his voice like a ventriloquist. I should know! I have just spent 2 weeks on Barra and we had a corncrake calling outside the cottage every night and often during the day. Much time was spent trying to track the source of the sound and see if we could see the offender.

On our last day, we were rewarded with the most unexpected sight – a pair of corncrakes appeared in the rough grass that was the unfenced ‘garden’ around the cottage we stayed in – we could see them through the glazed front door. Nobody moved, or spoke out until I had managed to photograph them through the glass, and then they continued on their way, pecking at the ground as they went! It was the first day we had been in the cottage at that time of day so we wondered if we had missed out on seeing them on previous days. 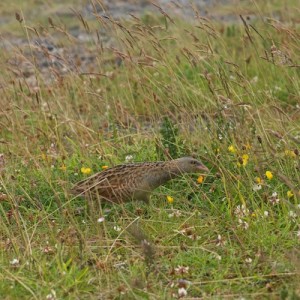 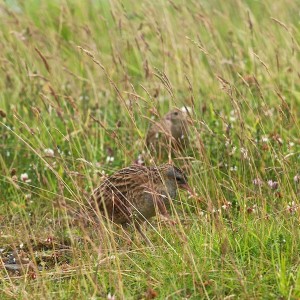