You are here: Home / Blog / Crackaig

Mull is peppered with scheduled monuments, such as the villages of Crackaig and Glac Gugairidh, poignant reminders of the past.

Last night Farmer had to go out to Crackaig to check sheep and so I went with him. It gave me time to wander and ponder on my own, while he went down to the shore. Crackaig and Glac Gugairidh were not torched or destroyed during the Clearances. There is very little written history about the villages, but the population died out partially from an outbreak of typhoid – there is a ruined house about a mile away which was used for isolation. 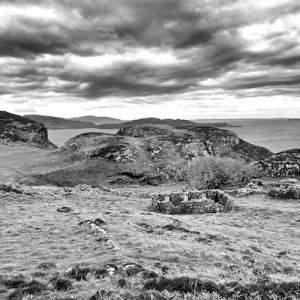 When we first moved to Treshnish we met P who remembered coming to Crackaig as a young boy to visit an elderly man, his relative, who was the last person living here. He died in the early 1900’s. As I walked through the ruins, it felt extraordinary to recall that for a moment, we had first hand experience of an oral history linking back to a time when the village was alive over a hundred years ago. I am not often there in the evening, and it felt particularly moving to think of what the families who lived here might have been doing at the end of their day – had they been cutting the peats, or was that finished during a good spell of weather earlier and were the peats now lying out to dry. 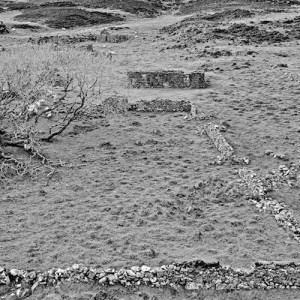 Historic Scotland come and survey the scheduled monuments every few years. There was someone here last month looking at about 6 sites on the farm, and it was good to know that we are looking after the sites, and don’t need to do anything else. We don’t allow our cattle to graze on this part of the hill in case they knock the walls down. We control the bracken as best we can, particularly around the ruin walls. We have controlled the bracken up above the village where the village fank was and our sheep are grazing there again. 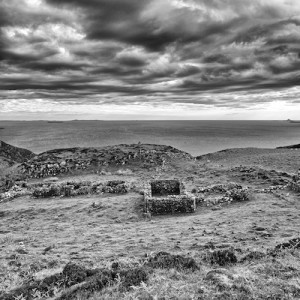 This is looking down from the protective bluff at the top of the cliff above the solitary schoolhouse building, looking at the short stubby scrub trees clinging to the cliffs, a remnant of Atlantic hazel woodland. It is a valuable habitat for birds and the rare Hazel Glove Fungus. This is the scrub woodland we tell walkers to look out for, as the zigzag path used by the villagers to reach the shore is just beside it, but hidden from view in this photograph. 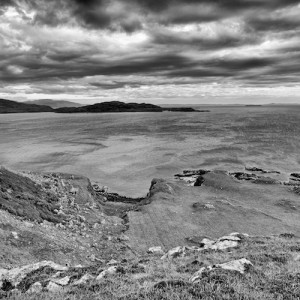 There is a pair of Golden Eagles nesting along the cliffs nearby but we didn’t see them last night. However we were rewarded by the sight of a mountain hare in the heather as we walked back over the hill to the farmhouse. We are still seeing them on a daily basis near the house, but it was magical to see one out on the hill!