You are here: Home / Blog / Golden eagles on Mull

What are your chances of seeing Golden eagles on Mull? Well it depends where you are! They are not as common or easily seen as the White tailed sea eagles, but we do see them quite a lot at Treshnish. Treshnish Farm is within the territory of a pair of Golden eagles though sadly they have not produced a chick for some years. The old male is a familiar face around here, particularly when the north wind is blowing. We call him the ‘golden oldie’.

The golden eagles enjoy hanging on the thermals at the edge of the Treshnish woodland and further along towards Shian and Duill, so it is always good to watch the sky to the north of those cottages on a day when the wind is coming from the north. Prasad has photographed and observed the ‘golden oldie’ over the last 8 years, and at one time, was quite concerned about his health, as several times on the hill, he inadvertently got quite close to him before he flew off. This is not typical behaviour of golden eagles on Mull, but an indication that he probably was in quite a poor state at that time. No one knows his age, but somehow he just looks old.

I was in the office the other morning when Farmer came running in, telling me to hurry, because there was a Golden eagle sitting on the edge of the cattle shed roof. As we walked up to the cattle shed he quietly ribbed me for probably not having the right lens on (a familiar refrain, I never do). In this case the lens was a 100mm lens, so not the best wildlife lens.. We were quiet as we approached the cattle shed in case he disturbed him. It was the Treshnish ‘golden oldie’ himself. I slowly walked through a gate to square up to the side wall of the building, clicking away as I walked. He just sat there! I was about 5m away from him when he eventually flew off. I have only cropped the images to square from the Nikon 5:4 format that I use – I didnt need to zoom in, he was that close! 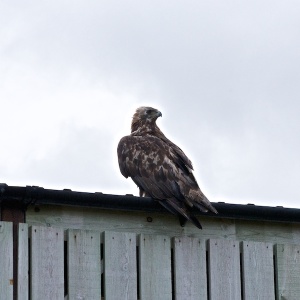 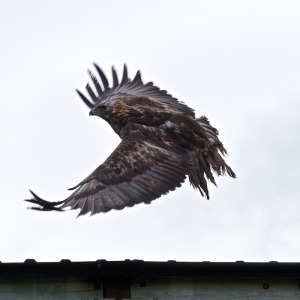 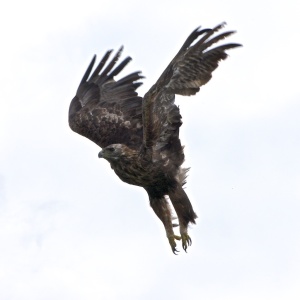 It is a huge privilege to live so close to a pair of golden eagles on Mull, to see them so regularly, and to have had a close encounter like this is something I will never forget. He will be sorely missed when his time eventually comes.