You are here: Home / Blog / Northern lights in winter

Our northern lights winter was going so well during the Christmas festivities, for 4 nights in a row I caught something on camera, then it went quiet again, or perhaps cloudy.. It felt like I hadn’t ‘seen’ the northern lights for some time, but it was really only a couple of weeks. There had been some strong forecasts but unfortunately, not just here but all over Scotland, we had thick cloud cover and couldn’t see a thing.

Today Farmer and I went to Tobermory, I had a meeting at the school and Farmer had some unfinished business at the dump. There have been 2 scheduled recycling lorry collections since Christmas, but for whatever reason on both occasions the lorry didnt appear and our recycling was still sitting at the end of the road at the end of the day. With the storms being so wild, Farmer didnt feel it was safe to leave the bins out especially as it always seems very difficult to find out when they might come out again.

With the trailer full of recycling bins we set off. It started to snow. We are not used to snow at all! Anyway it was wet snow and the roads were fine. We collected Daughter and went to the bakery for a hot drink. The Christmas decorations were still lit! We drove home in daylight though and it really seemed like the days are getting longer again. The road from Calgary to our turning was thick with slush. That would be fun if it froze! 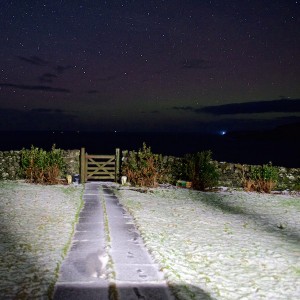 After dark, the skies had cleared, the temperature dropped, I was thinking about our northern lights winter, and whether tonight would be lucky or not. I watched the forecast. It was quite positive. Suddenly it was crisp and crunchy underfoot, and mid evening, I took an initial test photograph, with the help of the cat who didn’t sit still for long enough, which showed a faint glow and a faint ghostlike presence in the foreground of the cat who didn’t sit still. 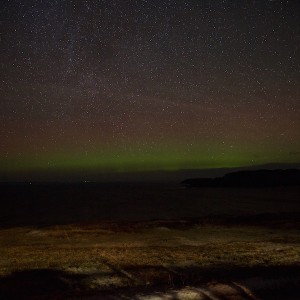 By midnight it was stronger, but the clouds were beginning to come in. But as usual it was quite special being outside listening to the wind in the trees and watching the stars. The lights on the water raced quite quickly across my 10 second exposures, I thought perhaps it was a dredger at first, but realised it was quite big, so probably a tanker. 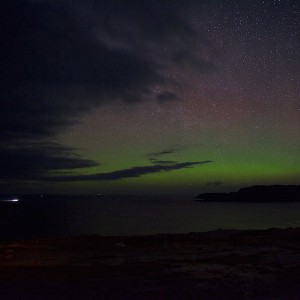 I couldn’t keep my eyes open any longer and had to go to bed.