The weather forecast was for 100% cloud cover this morning so we really didn’t expect to see the solar eclipse. I had ordered special solar eclipse viewing glasses and a sheet of Baader safety film so that I could make a filter for my camera, but having looked at the forecast last night, I didn’t bother to make it up. This morning however I thought I would, just in case. The cloud cover was quite thick at 8.30 but I went out for a look anyway, and to my surprise I could see gaps appearing in the cloud. To the north west, over the isle of Coll, there were long streaks of blue. To the south, towards Ben More, occasionally tiny gaps began to appear. My hopes were raised, ever so slightly.

To cut what could be a very long and dull story short, the clouds parted for long enough half a dozen times for me to see the progression of the solar eclipse through the clouds, with no need for the funny glasses, and no need for the special lens filter! 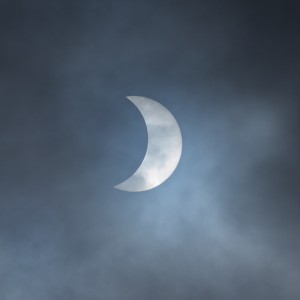 Having had two wonderful aurora borealis experiences this week as well as some wonderful blue skies, I really didn’t think we could be so lucky as to see the solar eclipse as well, so it has been a fantastic way to end the week. The photographs I took of the northern lights on the 17th March are in the blog post below, the ones I took of the second night, at Croig, are here.