You are here: Home / Blog / A trip to Tobermory

I had to go to the doctor’s surgery in Tobermory yesterday. I dropped Daughter off at High School on the way, instead of her taking the bus from Calgary. It was trying to snow as we left home, and the temperature display in the car hovered between 2 and 3 degrees all the way to Tobermory.

There weren’t many folk in the surgery yesterday, so I was soon out and able to go to the bakery for coffee! It was very relaxing sitting with the sun coming in through the shop window. 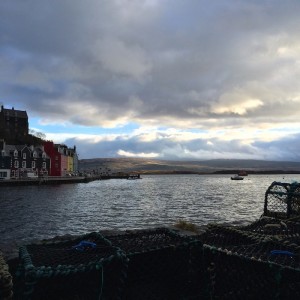 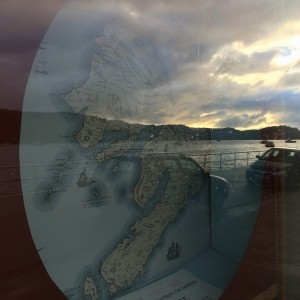 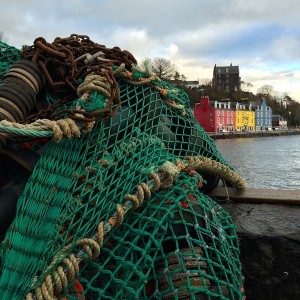 Although some of the restaurants and cafes close for the winter, there are still places in Tobermory to go for a coffee or a meal, and most of the shops are open too. The Mull Museum is closed in the winter, but I noticed the sunlight reflecting on the window as I walked past. And just now in selecting the photographs for the blog, it was interesting to see on the map in the museum window, that there was no track connecting Haunn to Treshnish when the map was drawn, but there was a connection between Haunn and Crackaig instead. I suppose because our main route to and from Treshnish is via Calgary and Dervaig rather than Torloisk and Ulva Ferry, that seems to be surprising when it shouldn’t be. Hundreds of years ago, when these villages were full of families, there were more settlements on the south facing coast than further north.

Tobermory main street was pretty deserted, but I bumped into someone who has one of Cap and Jan’s puppies, so couldn’t resist going over to see her – I can’t believe they will be 3 years old in March! The tide was very high again, but no seaweed on the street today. 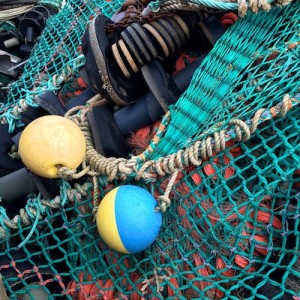 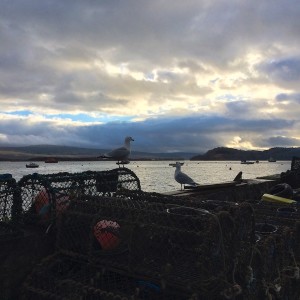 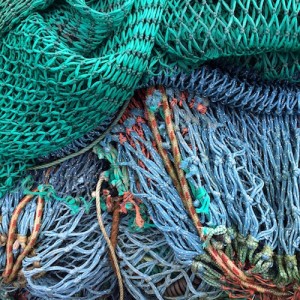 The fishing pier was deserted but for a lonely red van and some seagulls.

By the time I reached Dervaig it was much warmer (5 degrees), the tide was still high and the water calm in Loch Cuin. 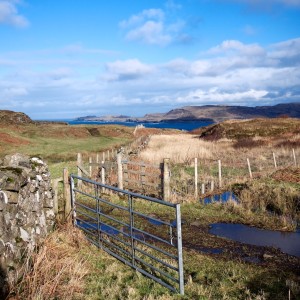 It turned out to be a beautiful winter’s day at Treshnish! This photograph is of the gateway into Scoma field next to the Haunn gate wall, looking north across some natural regeneration woodland (early stages!) towards Calgary and Caliach headlands. I was on my way to see how the new shower for Middle Cottage was coming along.